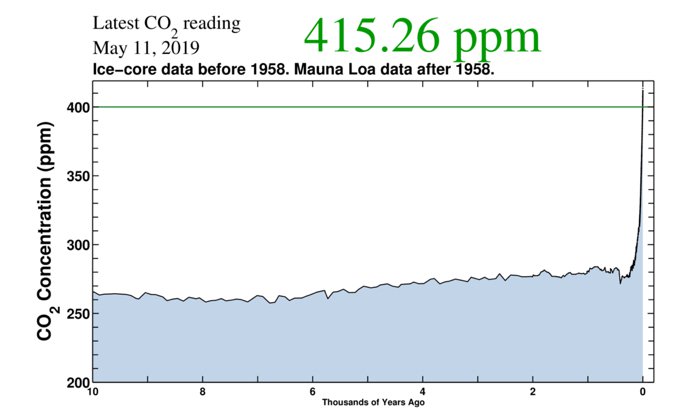 Yet another alarming milestone of humanity’s damaging effect on the environment has now officially been reached – crossing a barrier into a hot, polluted future like the planet hasn’t witnessed in millions of years.

This weekend, sensors in Hawaii recorded Earth’s atmospheric concentration of carbon dioxide (CO2) passing 415 parts per million (ppm) for the first time since before the ancient dawn of humanity.

On Saturday, CO2 concentration recorded at the Mauna Loa Observatory in Hawaii by researchers from the Scripps Institution of Oceanography hit 415.26 ppm – the latest in a dire series of climatic thresholds being breached by a human society that refuses to relinquish the conveniences afforded by fossil fuels.

“This is the first time in human history our planet’s atmosphere has had more than 415 ppm CO2,” meteorologist Eric Holthaus tweeted.

“Not just in recorded history, not just since the invention of agriculture 10,000 years ago. Since before modern humans existed millions of years ago. We don’t know a planet like this.”

It was only a few years ago that carbon pollution in the atmosphere soared past 400 ppm, and it didn’t take long much longer to reach 410 ppm (in 2017).

In fact, with this record-breaking surge in atmospheric carbon poisoning the skies and trapping Earth’s heat, scientists knew hitting 415 ppm in 2019 was all but inevitable.

This month has already seen a number of incremental carbon records broken, including a mistaken reading published on the Scripps website that records the ppm data – The Keeling Curve – which suggested the 415 threshold was actually breached on May 3.

That false data was subsequently revised, but not before a handful of sites reported the grim accomplishment.

This time, unfortunately, there appears to be no doubt of where we’ve arrived at.

For the full article, links and graphics, click here.