2016 was the hottest year on Earth since record keeping began more than 130 years ago, and humans are mostly to blame. Last year’s average temperatures over land and sea surfaces were the highest ever seen since 1880, and were .94 degrees Celsius above the 20th-century average. Across the planet, there was not a single land area that experienced lower-than-average temperatures for the year. The findings come two days before the inauguration of an American president who has called global warming a “Chinese plot” and vowed to roll back his President Obama’s efforts to cut emissions of heat-trapping gases.

This data shows that politicians cannot wish the problem away. The Earth is heating up, a point long beyond serious scientific dispute, but one becoming more evident as the records keep falling. Temperatures are heading toward levels that many experts believe will pose a profound threat to both the natural world and to human civilization.

2016 also marks the third consecutive record-warm year for the globe. Every month from January through August became the warmest such month on record. In fact, the 16 successive months from May 2015 to August 2016 either broke or tied the previous record for that month. The poles are also feeling the heat. The heat extremes were especially pervasive in the Arctic, with temperatures in the fall running 4 degrees Celsius above normal across large stretches of the Arctic Ocean. Sea ice in that region has been in decline for years, and Arctic communities are already wrestling with rapid coastal erosion. An estimate of the average annual sea-ice extent in 2016 in the Arctic was the lowest annual average on record.

The El Nino climate cycle, which is characterized by unusually warm temperatures in the equatorial Pacific Ocean, were partially to blame.  The vast majority of the warming, about 90 percent, was due to human activity, mainly through the emission of greenhouse gases. Scientists used global climate models to determine how different factors contributed to climate change. 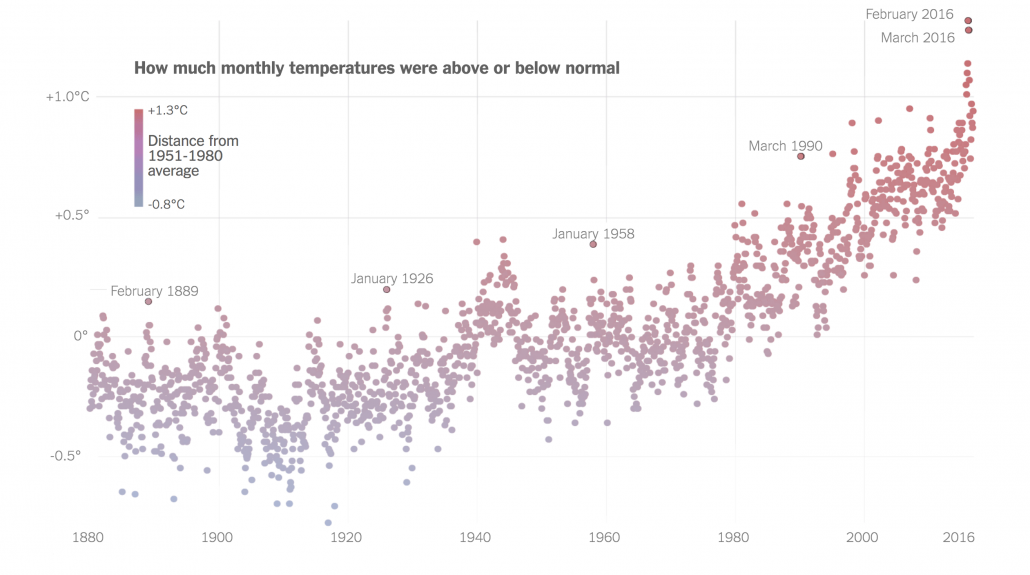